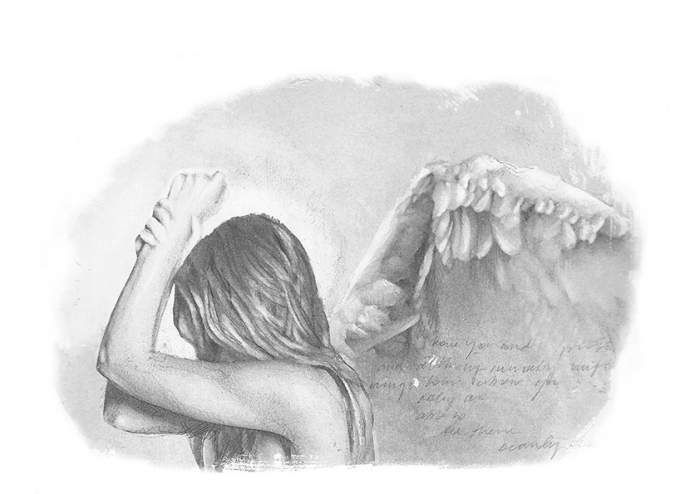 Paper Trail – An invitation to attend and exhibition of works on paper. 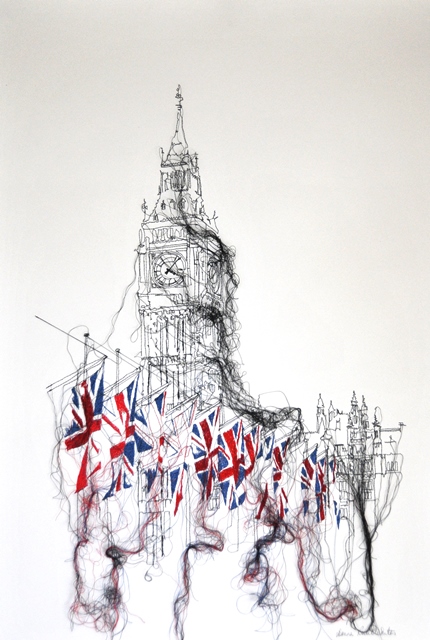 Stitched Treads on to Paper, mounted and framed.

A personal invite to our latest showing. An Exhibition of works on paper. ‘Paper Trail’ brings together a range of artists, who cover a broad spectrum of drawings and mixed media.

You are warmly welcome to come and meet a number of artists that opening Saturday 1pm until 4pm. Donna Rumble Smith, Jane Thomson and Darren Stevenson to name but a few will all be present in the gallery to talk about their techniques, ideas and inspirations.

Come and enjoy a glass of wine and view stunning original artwork. 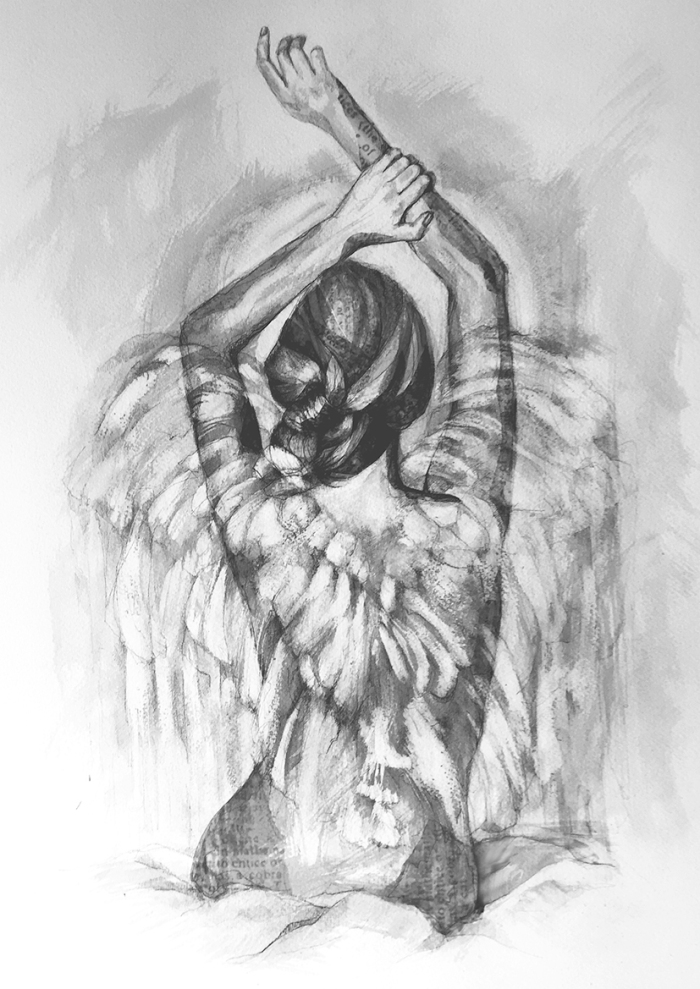 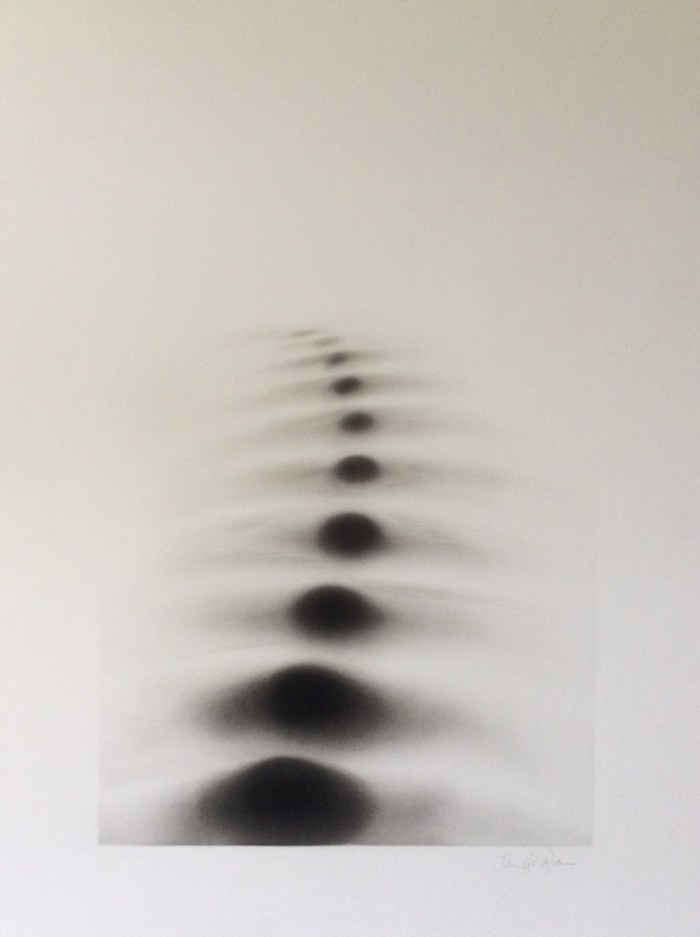 The work of Ian Hodgson, is perfect for that peaceful spot in the house.

For more information or to receive the full brochure of artist and works on paper to contact the gallery. 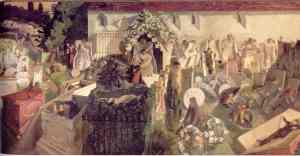 For centuries Christian imagery was the main focus of mainstream artistic endeavour. Some of the most famous religious triptychs of the Middle Ages, such as Rubens ‘Elevation of the Cross’ (c16100 which can be seen in Antwerp Cathedral, or Master of Delft’s ‘Scenes from the Passion of Christ’ (c1510) on display at the National Gallery, London demonstrate the importance and value of religion in Western art at the time. Bible stories and religious events were depicted in often large, figurative paintings, using precious paint colours such as lapis lazuli blue, both of which served to impress the audience with the seeming veracity of their subject matter. But times were of course very different then than now. Religion was arguably so central to European culture that, with a largely illiterate proletariat, depictions of religious scenes informed and educated as well as decorated. As the centuries passed by and as the importance or domination of Christianity on the lives of the masses changed, religious images as art became increasingly subverted in a challenge to the Christian hegemony. The work of Sir Stanley Spencer springs to mind when I think of how this is exemplified in the 20th century. His work ‘The Resurrection, Cookham’ (1927) is set in the grounds of the Holy Trinity Church in his home village in Berkshire and shows Spencer’s friends and family from both Cookham and Hampstead, and others emerging from graves watched by figures of God, Christ and the saints. To the left of the church some of the resurrected are climbing over a stile, others are making their way to the river to board a Thames pleasure boat, others are simply inspecting their headstones. In creating this work which The Times art critic described as “the most important picture painted by any English artist in the present century…” Spencer brought religious art straight back to cultural prominence to a by now largely secular audience.

Moving forward to the current time, religious imagery in art and its use as a device to engage the audience in the comfort of the familiar, whilst challenging perceptions, is a common occurrence. Representations of Christianity in secular art are very common and are popular and acceptable in most modern genres. We do not generally treat a Christian religious image used in art as an object of reverence from a spiritual perspective – we are unlikely to be persuaded to buy such a piece from a religious standpoint. 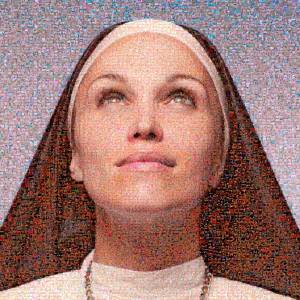 In the Gallery we have ‘Adoration Bleu’ by Joel Moens de Hase (pictured above) showing a saintly nun gazing upwards, seemingly in some kind of ecstasy, but her picture is made up of hundreds of tiny images of ladies in their underwear.

Dean Kemp’s statue ‘Acceptance’ is of a topless man wearing jeans but with angels’ wings sprouting from his shoulders. Acceptance of religiosity? Acceptance of wings? Interesting questions that do not place religion at the centre of the statue’s meaning but which are implied. 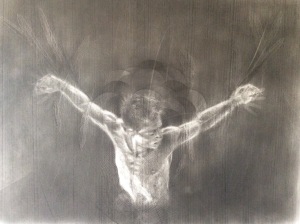 Although the story of Icarus is taken from Greek Mythology is does proclaim many religious connotations notably the consequence of personal over-ambition. Ian depicts his figure with arms out stretched mimicking the crucifix, probably the most principal symbol for Christianity. 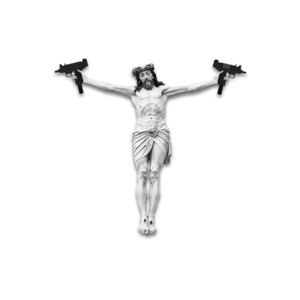 Finally, we have seen a great deal of interest in the religion themed pieces by Magnus Gjoen – a print of his piece ‘Mala Fide’ was snapped up by a discerning buyer in the gallery earlier in the year and this depicts Jesus holding two machine guns. The artists draw on a rich tradition of religious representation and yet they all have a twist in the tail