On September 10, 1981, Artist Pablo Picasso’s monumental anti-war mural “Guernica” was returned to Spain after four decades of refugee existence. One of my favourite pieces, the painting was inspired by the destruction of the Basque town of Guernica by the Nazi’s during the Spanish Civil War. 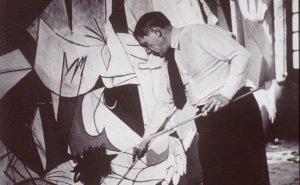 Picasso working on his “Guernica”

At the time, Picasso was working in Paris. On hearing the news of devastation and destruction upon this city, he painted arguably one of the most famous paintings in the world ever! It shows the tragedies of war and the suffering it inflicts upon individuals, particularly innocent civilians.

In 1939, Picasso gave the painting to New York’s Museum of Modern Art on an extended loan and decreed that it not be returned to Spain until democratic liberties were restored, eventually returning to Spain in 1981–eight years after Picasso’s death. The work now hangs in Madrid at the Reina Sofia, Museum of Art.